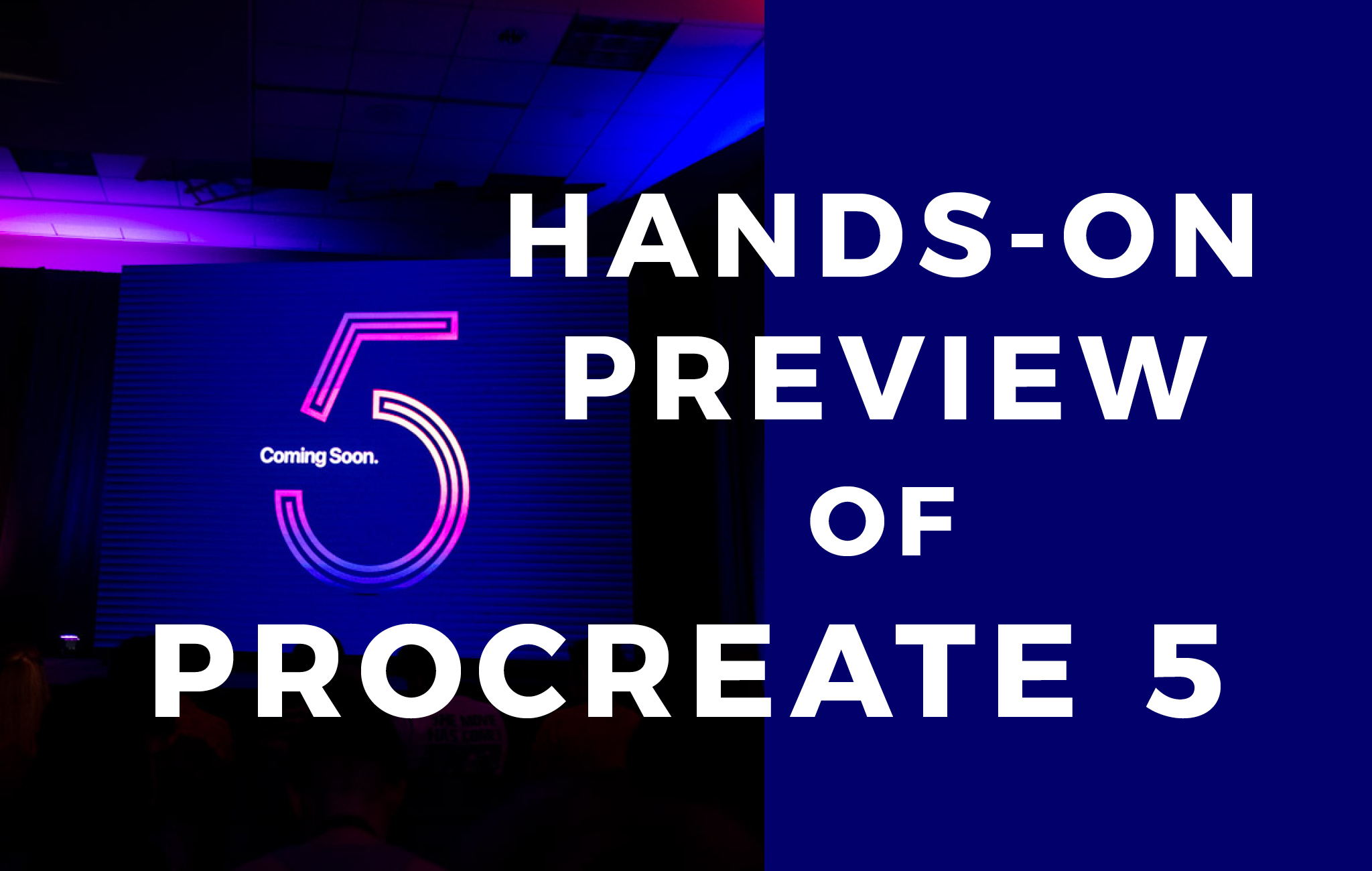 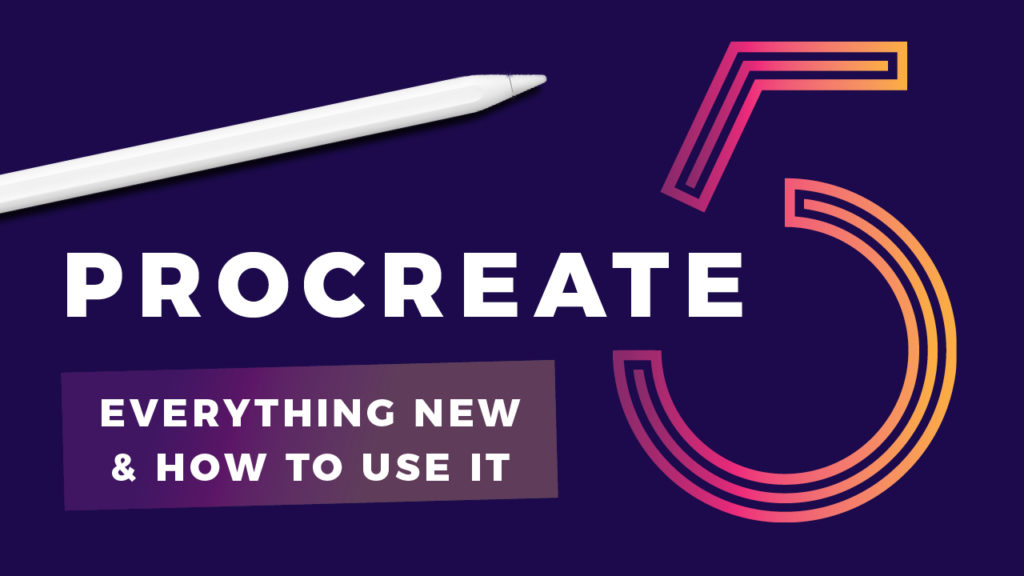 Learn all about it in my comprehensive, in-depth, Procreate 5 tutorial.  Learn about everything that’s new in Procreate 5 and how to use all the new tools and features. 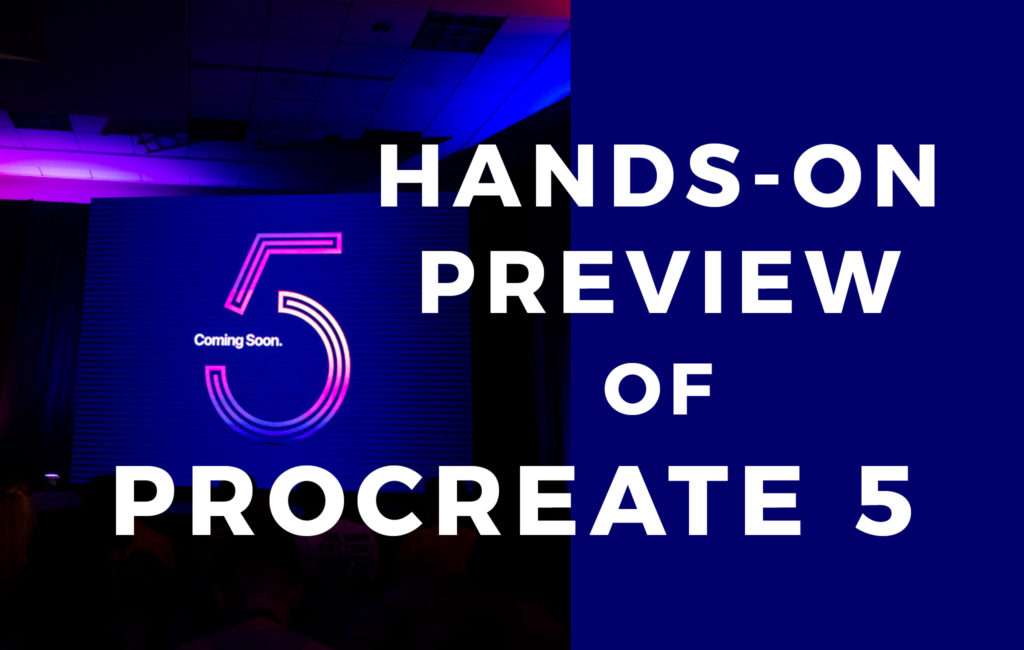 A Hands-on preview of Procreate 5 BETA

NOTE: This article covers Procreate 5 BETA, a pre-release version of the update. Tools and features may look different in the final release.

Probably the biggest news in the world of digital art right now is the announcement of Procreate’s latest massive update, version 5. I’ve been geeking about new tech releases for many, many years. However, I don’t think I’ve ever been as excited about a software release as I am for Procreate 5.

Scheduled to be released later this year, Procreate’s latest development is a force to be reckoned with. I’ll be sharing with you my hands-on experience with the update and what exciting things you can expect to see when it goes live. 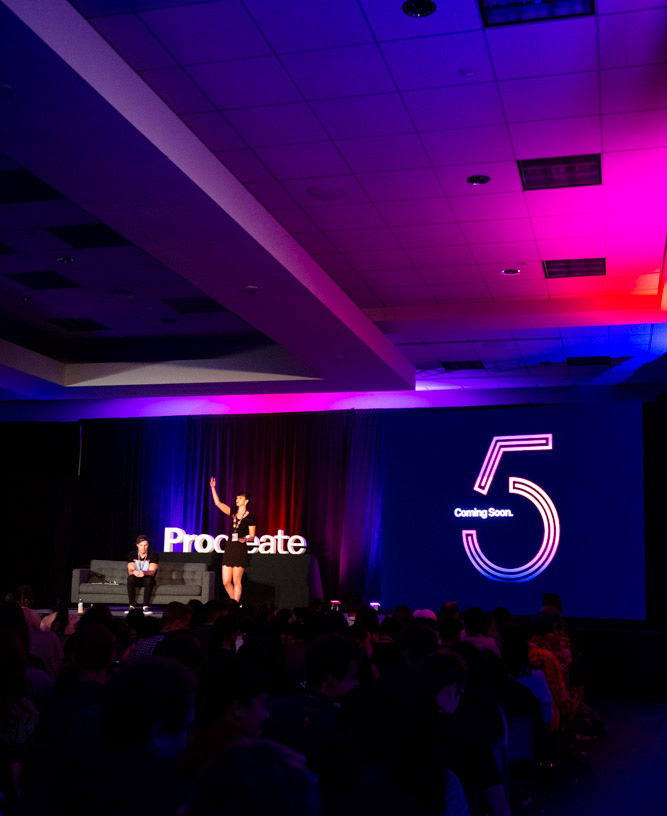 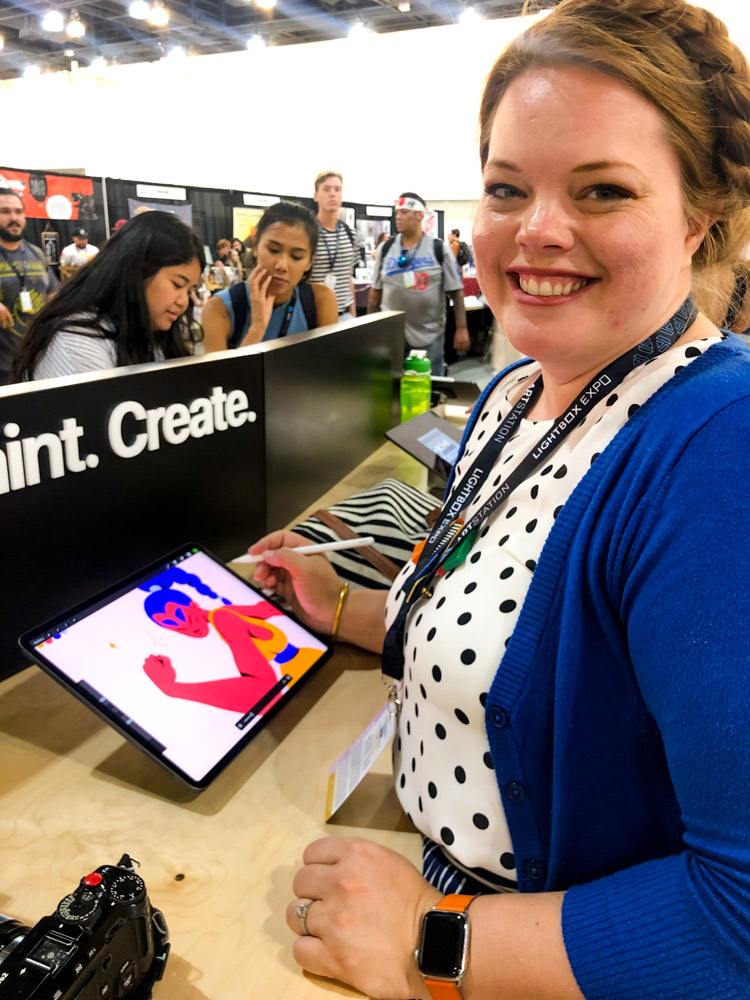 Procreate was the primary sponsor of the inaugural Lightbox Expo, Sept 6-9, 2019.

I spent last weekend at Lightbox Expo, where the impending release of Procreate’s latest major update, version 5, was announced. Savage Interactive, creators of Procreate, loaded their booth up with a plethora of iPads running a developmental copy of Procreate 5, for we artists to test and play. I went through the app with a fine-toothed comb, learning about all the new features, including some that weren’t touched on in the official Procreate press release. In this post, I’ll share my hands-on experience with Procreate 5. Side note, Savage invited me to check out the new update at Lightbox Expo, but this is not a sponsored post. I am just THIS EXCITED and in love with Procreate and I want to share all the exciting new developments! 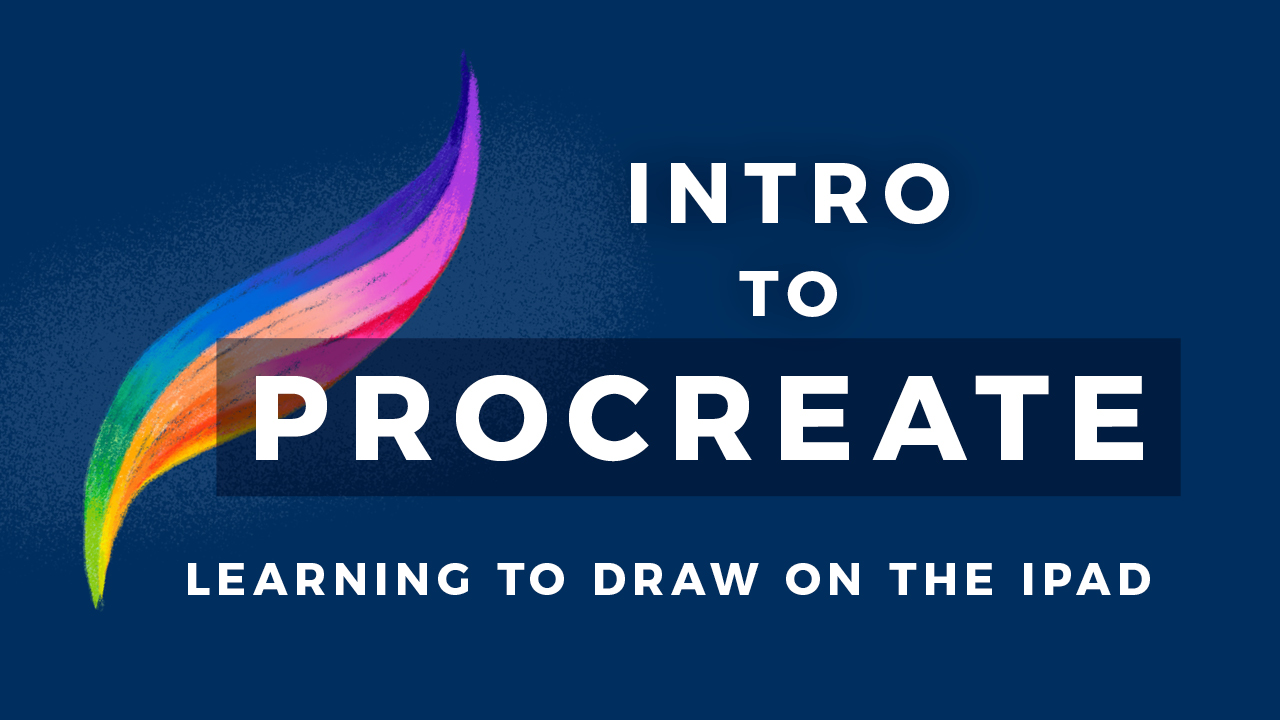 If you’re new around here, Procreate is a highly sophisticated, yet amazingly intuitive drawing and painting app that runs exclusively on the iPad. Over the past several years, Procreate has transformed the face of digital art and drastically changed the way many people make art in general, myself included. The thoughtful Procreate user-interface, combined with its bountiful set of robust features, continues to be light years ahead of the competition in the space of mobile digital art-making. The beauty of Procreate is this: it is powerful enough for advanced artists, concept and game developers, animators, and professional illustrators. While at the same time, it is friendly enough for a budding artist to pick it up and begin their art journey easily and joyfully.

Let’s jump in so I can share all the good stuff I’ve learned!

Firstly, significant improvements under the hood. Procreate 5 is powered by Valkyrie, a new lightning-fast graphics engine. This means your experience using the app will be even faster, and use of the Apple Pencil even more responsive. The overall interface of Procreate remains familiar, but a few taps through reveal some highly useful and powerful feature additions.

Additions to the new floating Color Picker are primary and secondary colors and a harmony panel.

The Color Picker has had an overhaul. It floats! You can now drag it out of the top right corner and place it anywhere on the screen, where it will remain accessible indefinitely or until you close it. Color Picker now allows you to select two colors. You can now designate a secondary color, which has many advantages. Thanks to Procreate 5’s new color dynamic brush settings, the secondary color can be applied as a blended hue. It also gives you quick access to a second color. You can use the tap and hold function to recall the previous colors on both the primary and secondary colors, meaning quick access to four colors. James Cudo, CEO and co-founder of Savage Interactive, also spoke about a color history panel that will only be available on the iPad Pro models, due to the extra screen real estate they provide. The color picker also sees the addition of the “Harmony” panel. Harmony wasn’t available to test at the time, but I was told its function is to help artists in creating color palettes. You’ll be able to choose harmonious colors for your work using various color theory models. 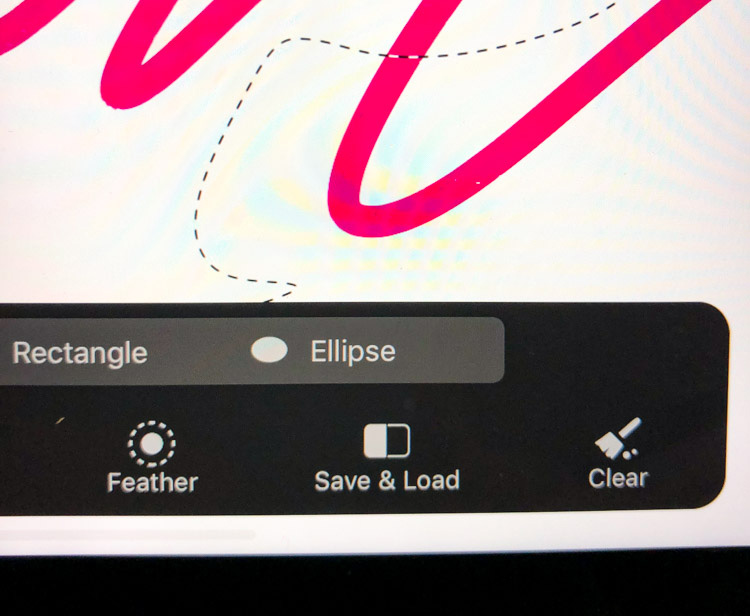 The ability to save and load selections is added to Selection mode.

Other interface improvements include redesigned Transform and Selection modes to take up less room on the screen. Transform mode also receives the ability to save and load selections, which wasn’t available for testing at the time, but is very intriguing! 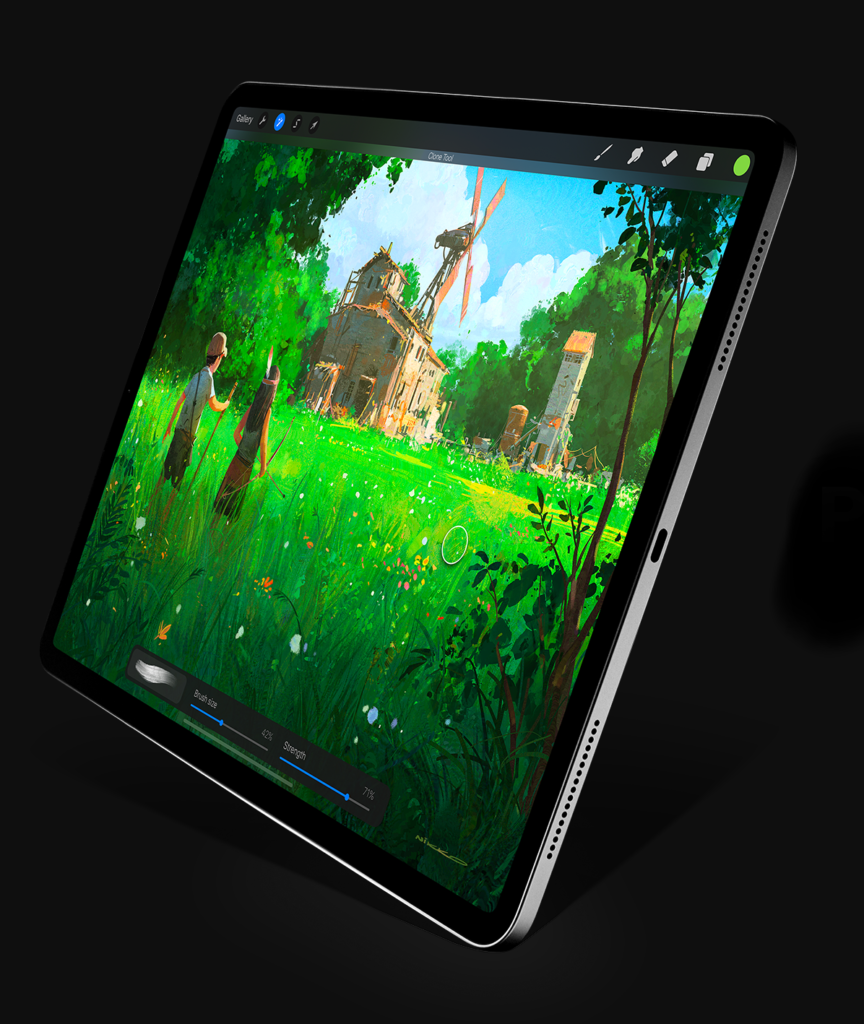 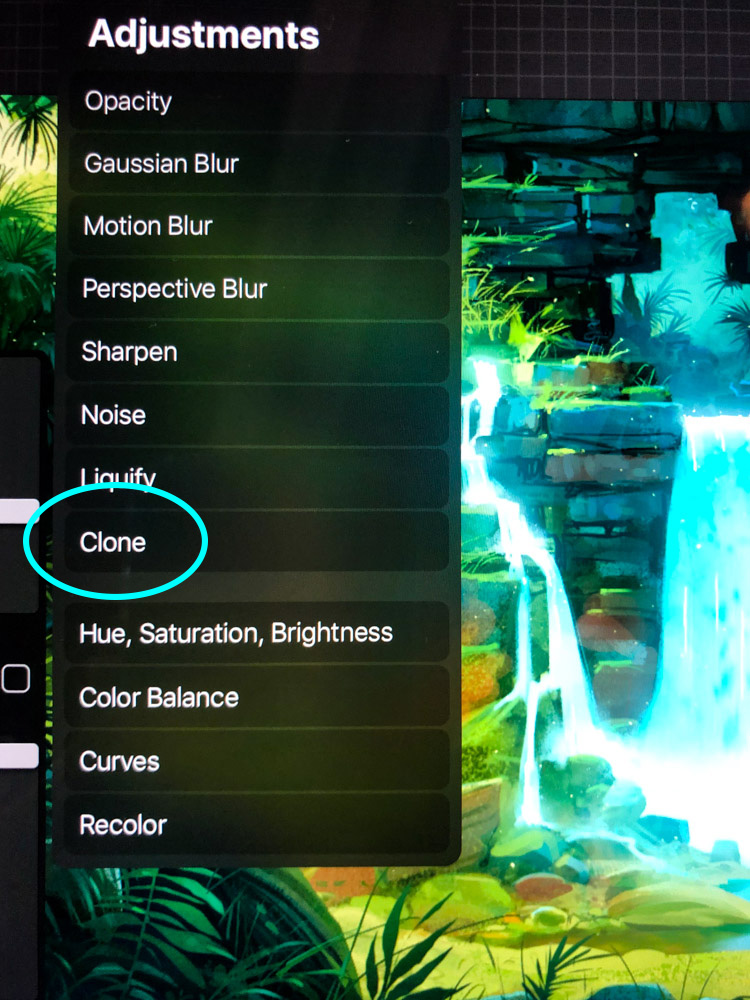 The Clone tool joins the list of Procreate features.

In the adjustments menu, you’ll see the new Clone tool. It allows you to duplicate areas of the canvas using any brush of your choosing.

A first in Procreate, artists can now work in CMYK color profiles.

The canvas template generator is revised. You can now set your canvas to a CMYK color profile. This is a much-requested feature that gives artists the power to work in colors that will translate to print accurately. Also found in the canvas template setup are time-lapse settings and other preferences as well. 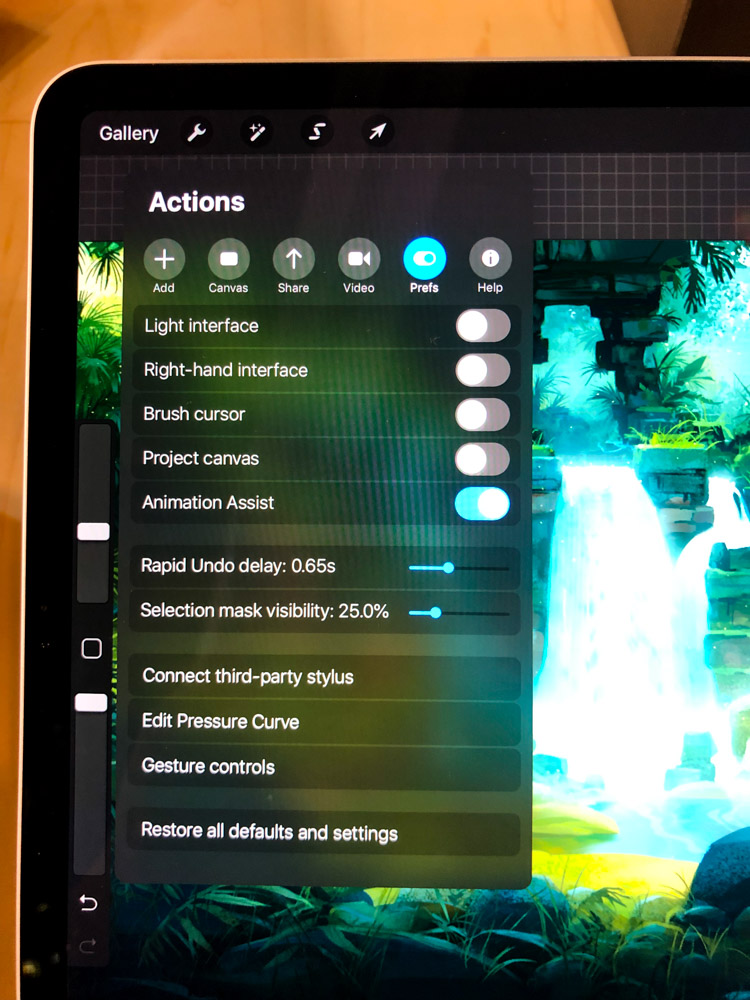 Another big addition to Procreate comes in the form of animation tools. Turn on Animation Assist, to bring up a new toolbar at the bottom of the canvas. Press the play button to see a full-size preview of your animation instantly. 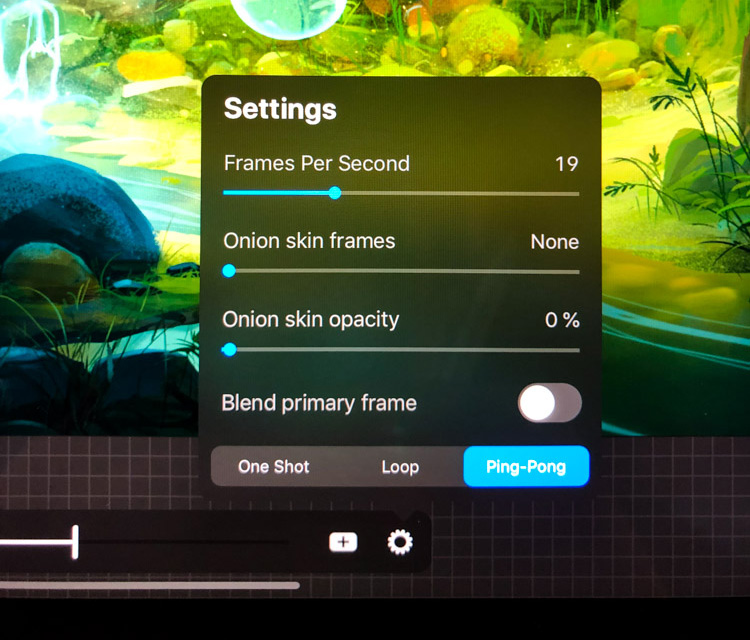 You can also adjust animation settings like frames per second, loop style (the new options are “one time,” “loop,” and “ping pong,” which plays the animation forward, then in reverse.) There is a new onion skin tool which makes drawing animation frames even easier. It displays a reduced-opacity version of the previous layer or layers (you can adjust how many onion skin layers are visible). You can also customize the opacity of the onion skin layers. 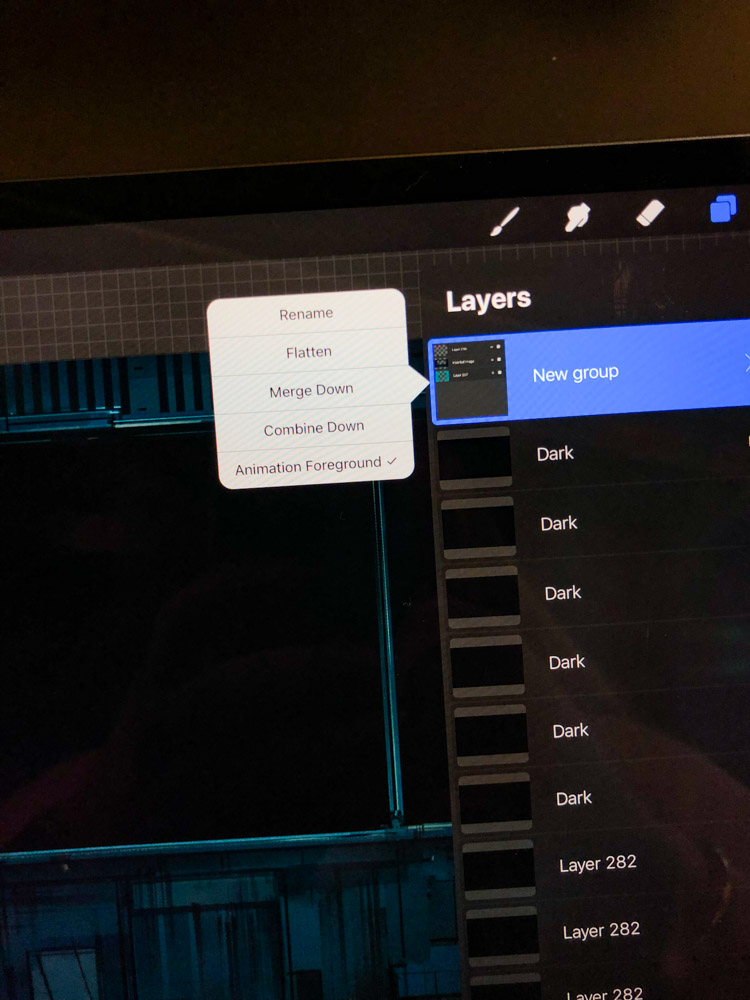 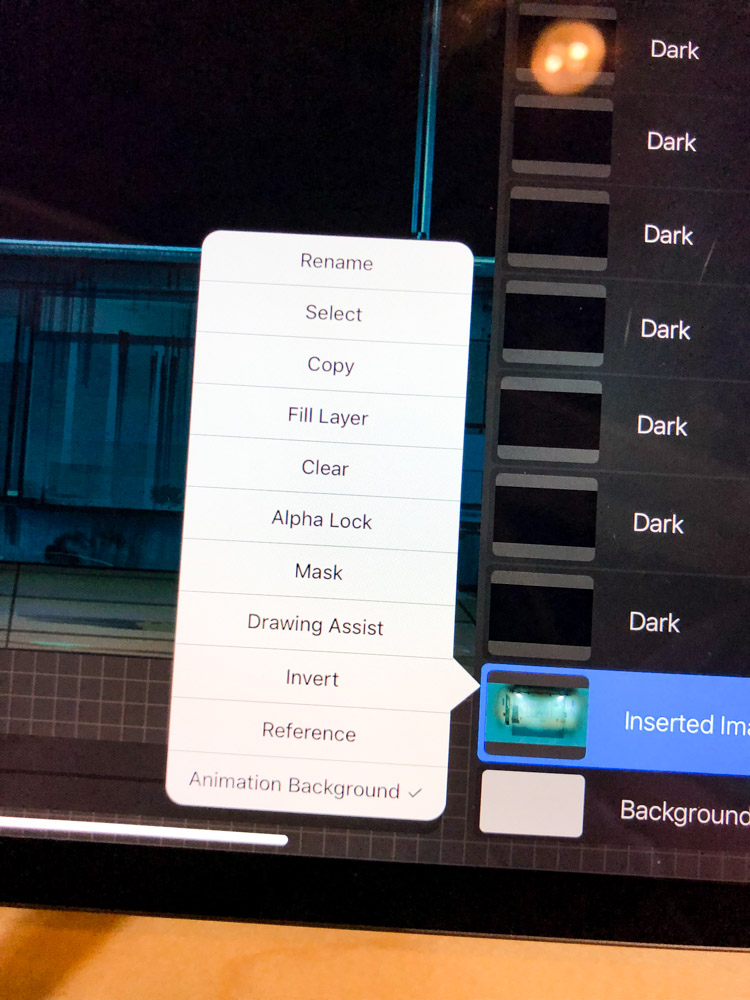 Designate a foreground and background layer for your animation.

Another useful new animation feature is the ability to designate a layer or layer group to be your foreground and background animation layer. This will save you from having to duplicate these static layers over and over again for each frame.

The Procreate Brush Studio is a game-changer

And finally, I’ve saved the most exciting aspect of this massive update for last. With Procreate 5 comes the addition of the new Brush Studio, a major step forward from the former brush settings panel. This is a HUGE deal. Being a brush maker myself, you can imagine my head exploding as I tested out each new setting. The brush creation engine now boasts over 150 brush settings and a full-screen brush editing interface/experience. Due to the massive improvements to the brush engine, an entire universe of brush possibilities are now at our fingertips. Effects that previous versions of Procreate were incapable of making can now be achieved. Artists and brush makers will gain exponentially more ways to customize and develop brushes. 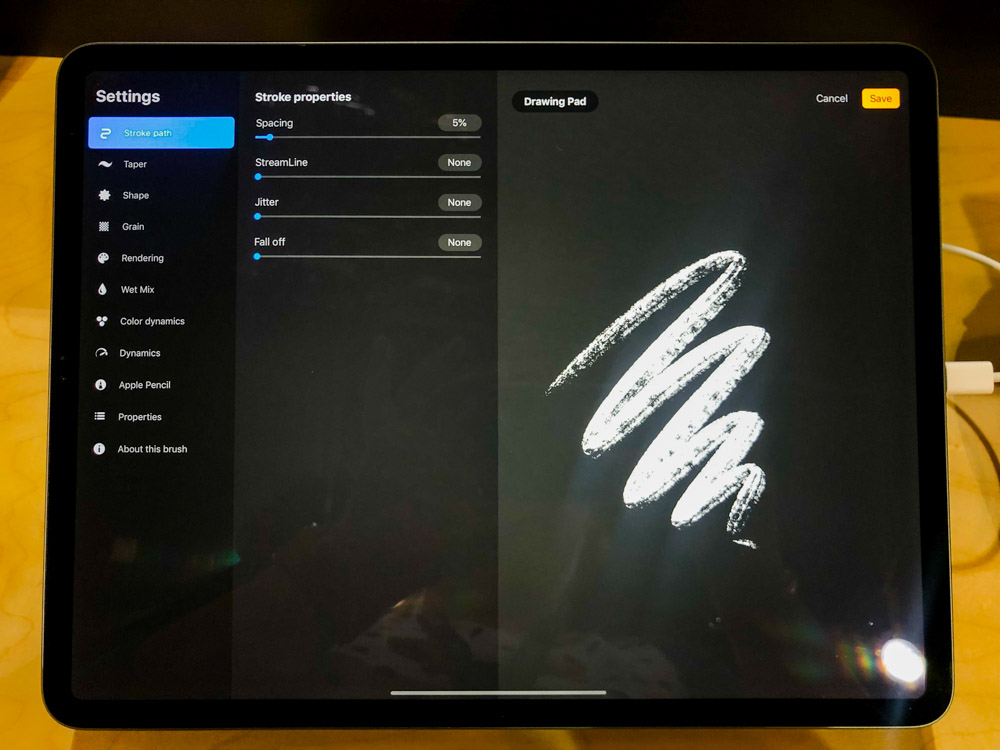 I will be honest, in Procreate 5, the brush settings become much more complex and sophisticated, thus presenting more of a learning curve to master. Most will be overwhelmed by all that is there! However, CEO James Cuda emphasized to me that they knew it was important to give this power to the artists. He elaborated that, to avoid over-complicating the app, the developers could have decided to exclude certain features from the brush engine. But they instead chose to arm the artist with as much control as possible to give them full power to create. This decision is one of the reasons I love this company so much. Most of them being artists or designers themselves, they genuinely believe in the artists that make up their customer base.

Brushes can be combined easily into Dual Brushes.

The additions to the brush creation engine are too many to count, but I will try to cover them all here. A significant addition is a new ability to combine brushes into Dual Brushes. Dual Brushes layer one brush over another within a single stroke. You can set difference blend modes to customize the way the two brushes interact. 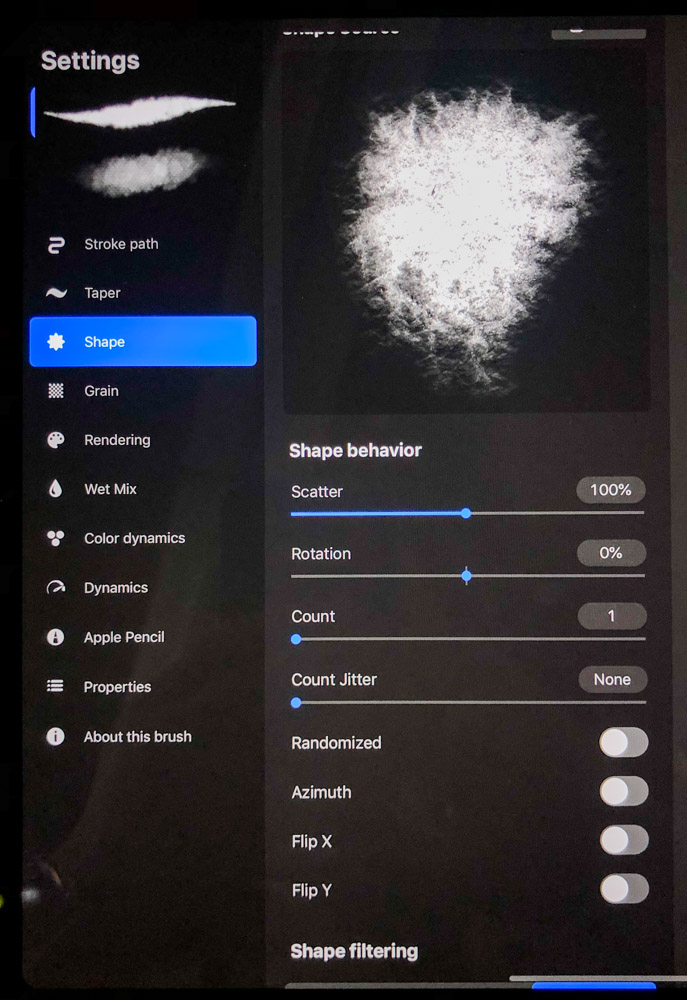 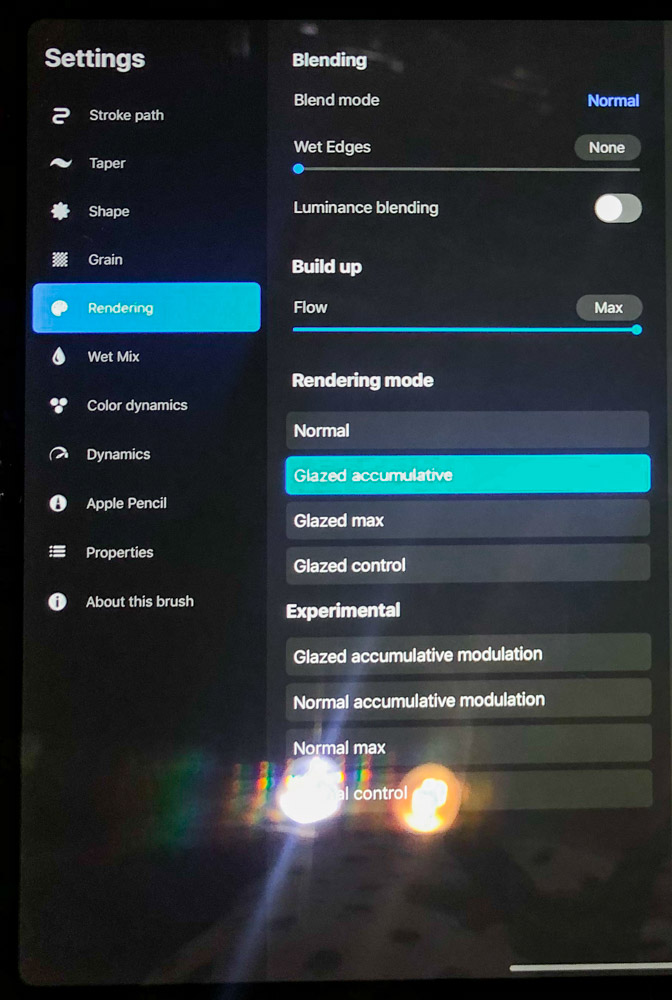 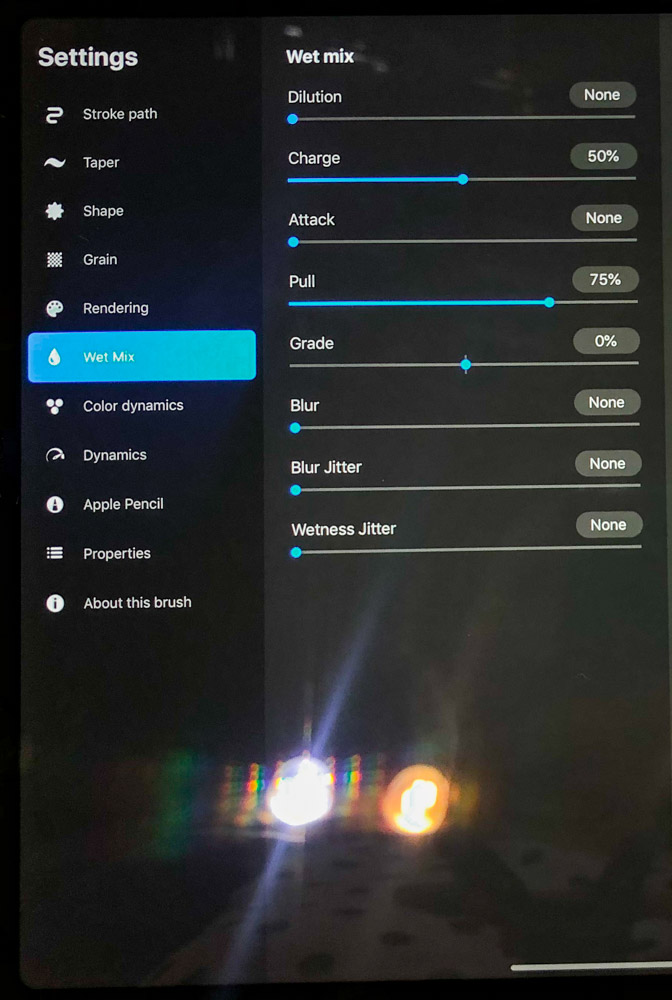 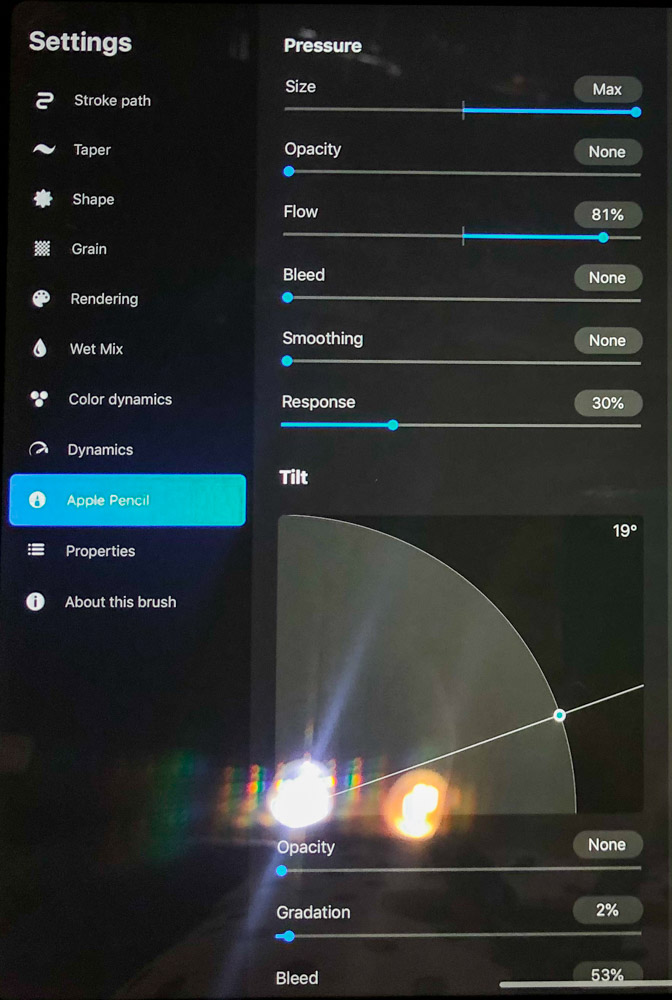 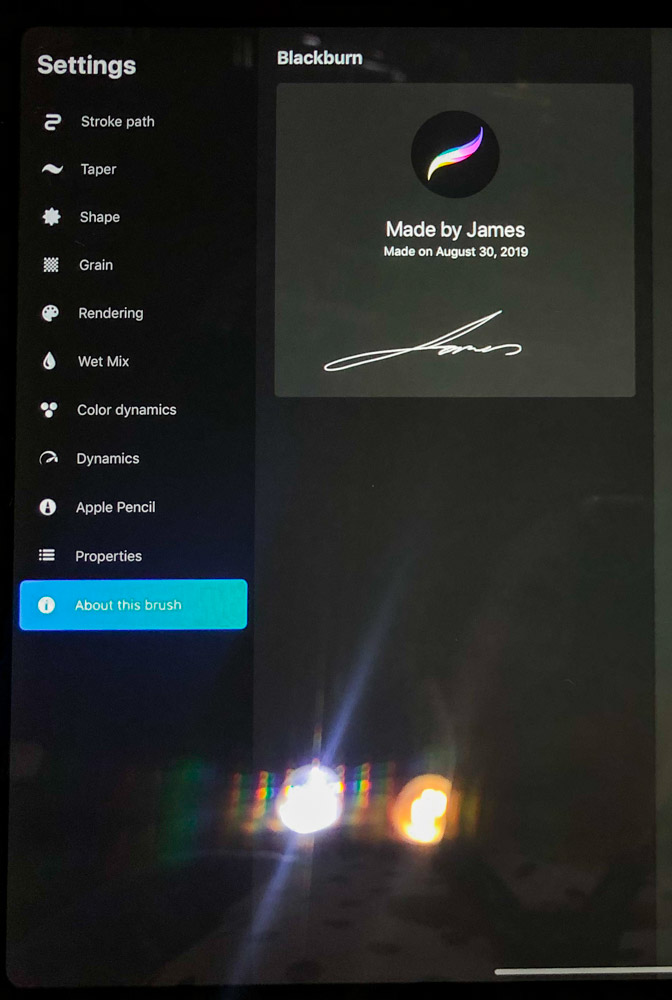 A look at some of the brush settings panel that have changed.

There are many new sliders and controls added within most of the brush settings panels. The Grain settings see major advancements with it’s new texture depth controls which are just fantastic. You can designate moving grain vs. textured grain, and adjust the brightness and contrast of the grain source image. There is a new built-in seamless texture generator, meaning you can import any texture as a grain source and Procreate 5 will automatically turn it into a seamless repeat, so your brush textures will look flawless.

The Shape panel’s additions are stamp count and count jitter. There is a new panel for brush rendering with a variety of new glaze settings, plus a “wet edges” function to make brushes that finally achieve a true watercolor look and feel! There are also new settings for making Wet Mix brushes. 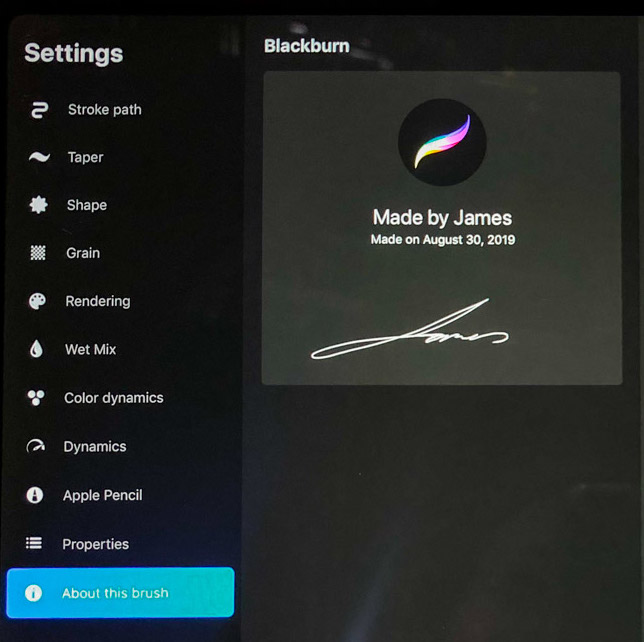 Another thoughtful touch an added brush author credit panel, so you can see who made the brush and when. Plus there will be an ability to set the “default settings” for a brush you’ve created. This is another much-requested feature that gives the user an easy way to reset the brush back to the way the brush maker designed it. Handy when you get a little carried away adjusting brush settings!

Color Dynamics allow a brush to produce many colors and/or values at one time.

And to me, probably the most exciting addition to the Brush Studio is the Color Dynamics panel with an entire array of controls that allow you to make multi-hued brushes. Pressure and tilt of the Apple Pencil can control hue, saturation, brightness, and even mix in a secondary color. You can also add color jitter, making a brush with multiples hues or values within a single stroke. You can do the same with a scatter or stamp brush to lay down shapes with multiple colors at once as seen in the video above. Infinite possibilities emerge with the settings in this panel alone. 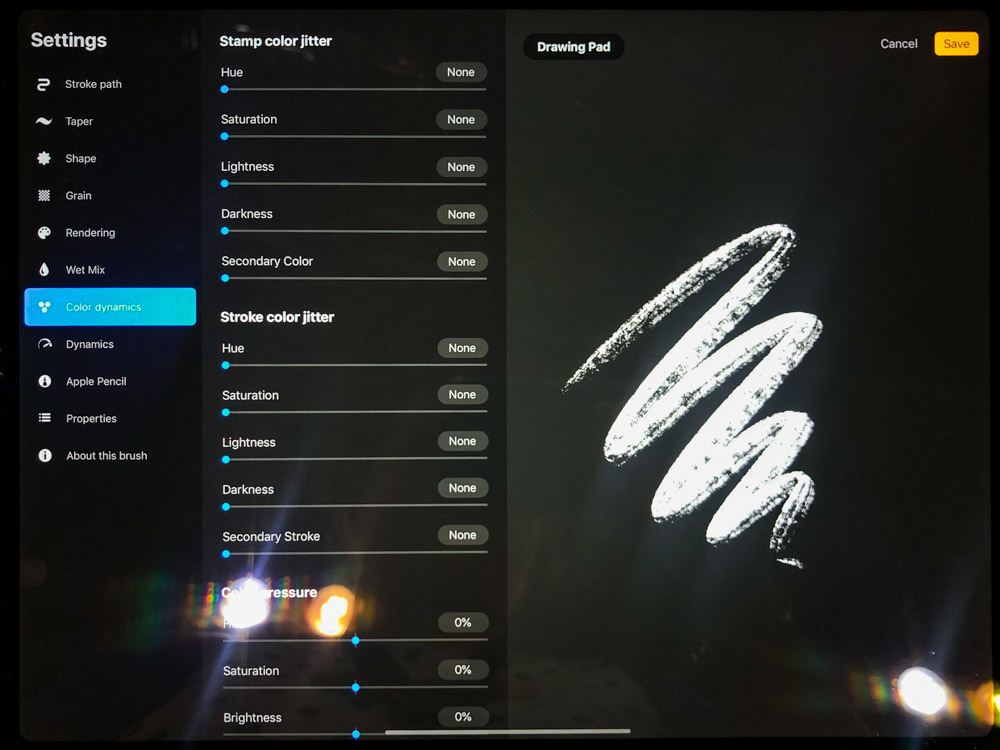 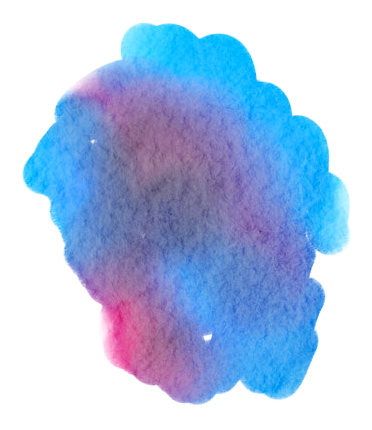 A brush I made while experimenting in Procreate 5’s new brush studio. Check out that dimensional texture and variance in hue!

Other aspects of the Brush Studio interface have improved as well. You can manually input percentages on a number pad if you’d rather not use sliders. Most individual settings allow you to adjust the pressure curve for each one. Visualization of the tilt controls is improved as well. You can even draw right within the studio to preview your brushes, even using multiple colors.

The new Brush Studio carries so much significance for Bardot Brush.  My mind is racing trying to process the possibilities. Get ready to see some super exciting new Procreate brush sets from me once Procreate 5 is live! 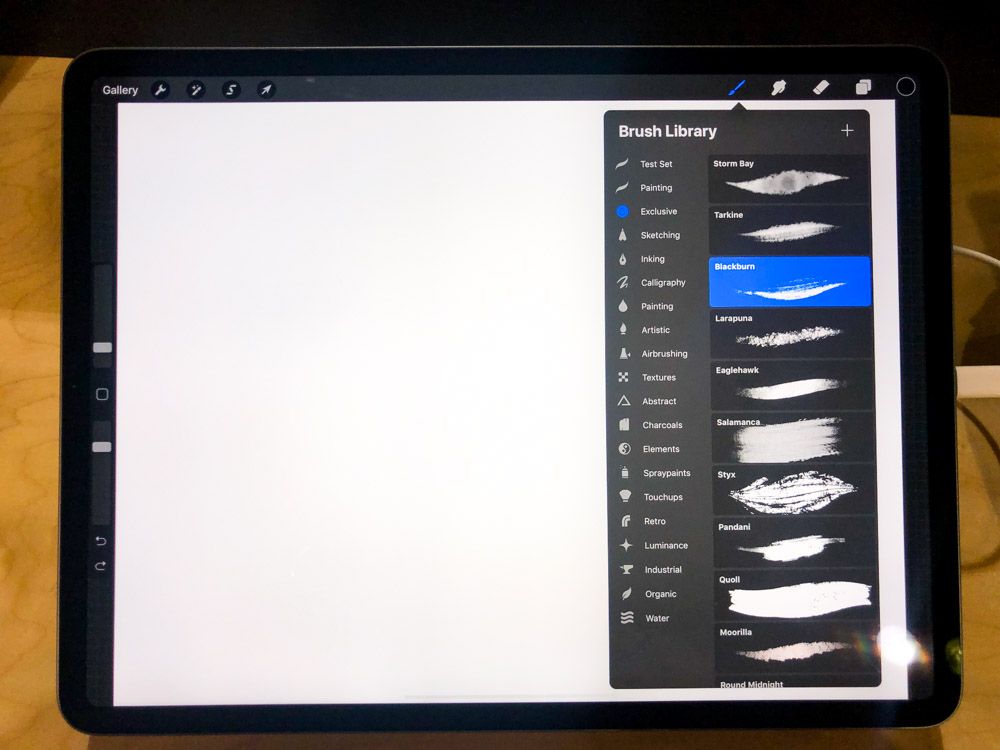 Speaking of brushes, Procreate 5 will have some new stock brushes! There’s also a whole new set of built-in brushes, created by the developers to harness version 5’s new brush engine features. And if you are a die-hard Photoshop artist, you will have the ability to import all your favorite Photoshop brushes into Procreate 5. Pssst, Photoshop people, I highly recommend you give Procreate a try!

So much more to come in Procreate 5!

In my hands-on testing and in conversations with the folks developing Procreate, it was abundantly clear that what I saw then is just the tip of the iceberg. There will be many more features and improvements to come, and I, for one, cannot wait to see what else they’ve got up their sleeves for Procreate 5!
I’ve tried my best to keep my cool in writing this article for you, but I am BURSTING with excitement for the new version of Procreate. Procreate 5 will be shipping to existing customers in late 2019 as a free update. I’ll be preparing a boatload of new tutorials covering the new features. Be sure to subscribe to the Bardot Brush YouTube Channel and Instagram account, so you don’t miss a thing!