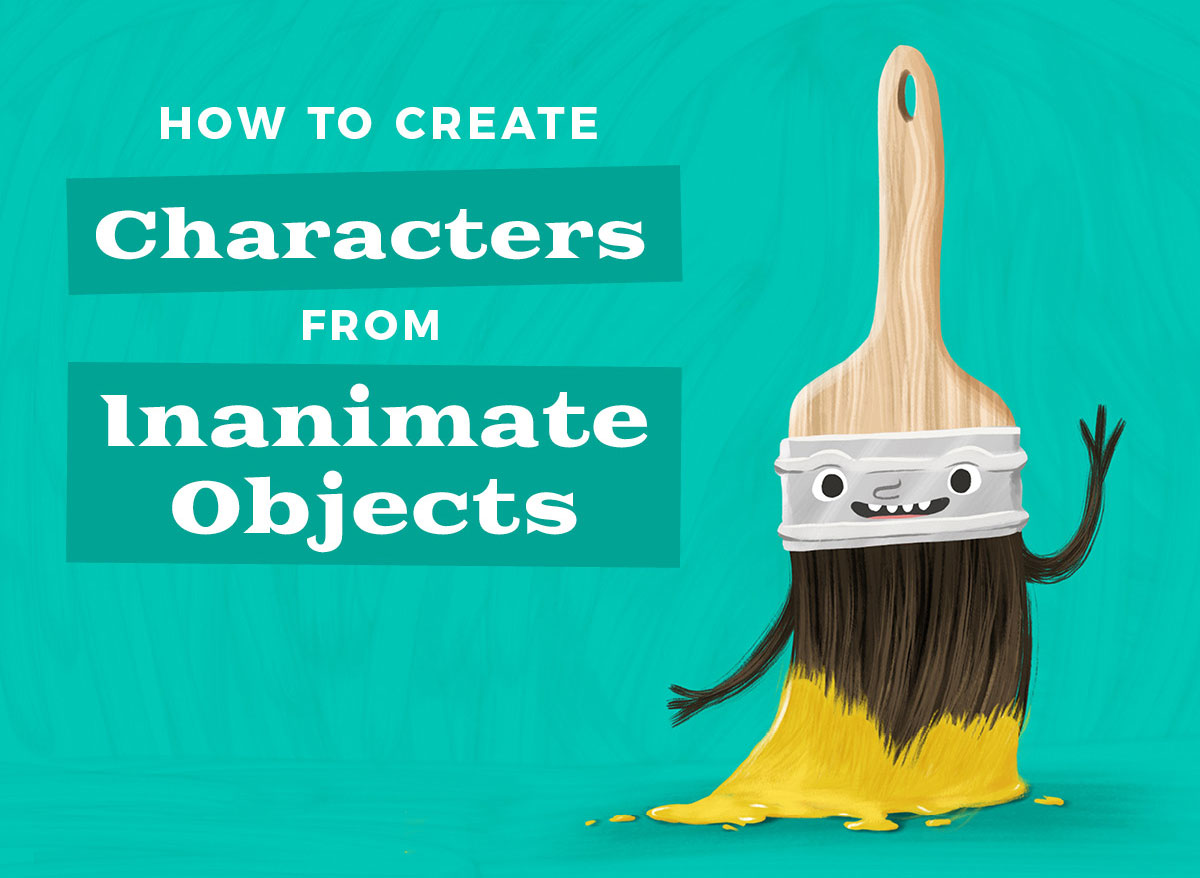 How to Draw Characters from Inanimate Objects

How to create characters from inanimate objects

An inanimate object is a thing that is not alive, such as a book, a chair, or a spoon. They might seem like unlikely candidates for character development, but it can be so much fun dreaming up their world. Our goal is to push beyond reality and imagine these objects coming to life with their own needs, desires, and stories.

Inanimate objects can only function with the help of something animate, like a human. For example, in the real world, a book sits on a shelf until someone takes it down. A vehicle stays put unless someone drives it. A glove can only wiggle its fingers when there is a hand inside. For our purposes, even a plant would be considered inanimate. Although it may have the ability to grow, a plant cannot perceive its own needs or do anything itself to meet those needs. Inanimate objects don’t have feelings or desires, don’t move around or interact with others; none of these things exist for these objects. And it is for that very reason that I LOVE the idea of turning objects into characters. Nothing is defined. It is up to YOU, the artist, to imagine them and the universe in which they reside.

There is much to consider when developing an inanimate object character. How do they move around? Do they speak? Do they interact with humans or live in their own universe? What kind of personality would that particular object have? 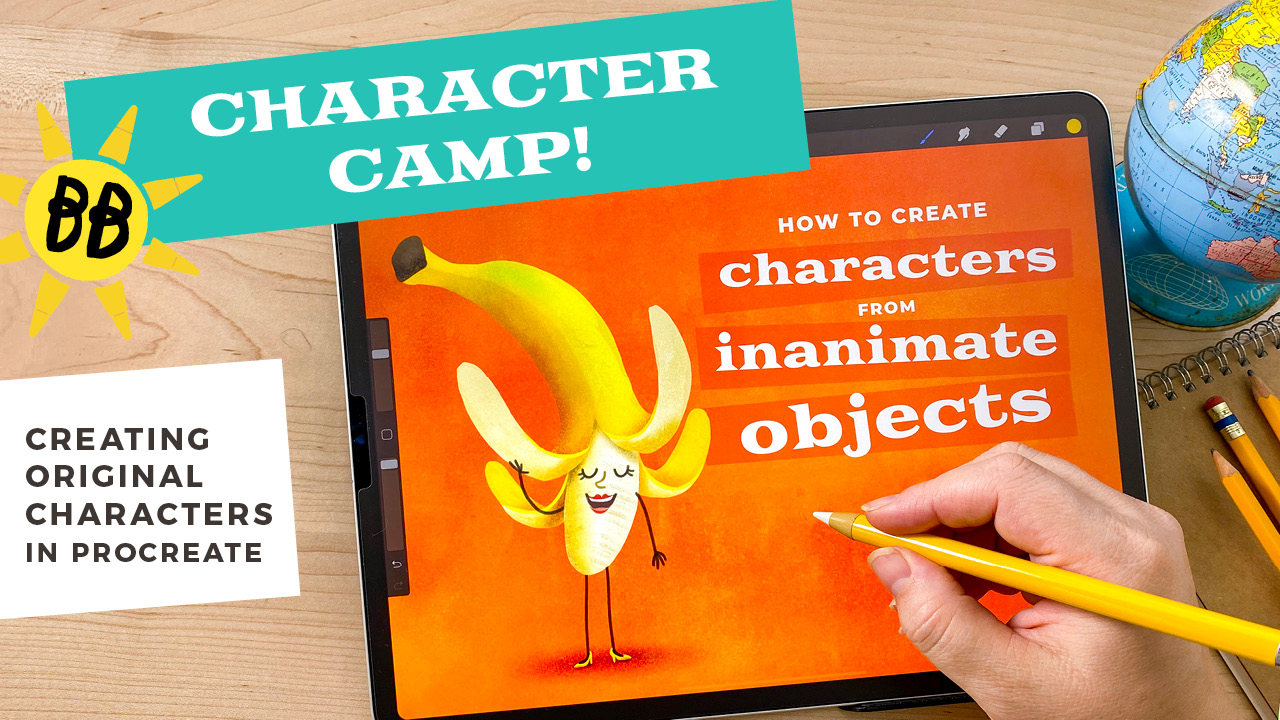 For something to be a character, it needs to have a way to progress it’s own story.

The object will need to have a way to move itself around, interact with other objects, and express itself. Below are some questions to ask about your character. Remember, there is a scale of anthropomorphism you could apply to your character, from a little to a lot. Your job as the artist is to decide how human-like your object will be.

Answering these questions about your object will help you decide how your character will look and function. When you get to the drawing stage, you will also do a visual brainstorm of possible body styles.

Your object will need a well-defined personality that contributes to the overall look and feel of the character.

What is the personality of the object? What interests do they have or troubles do they face or because of what they are? Take this example: imagine a duo of characters, a pencil and an eraser. The pencil is an inventor and an idealist who wants to be creative and imagine a better world. The eraser is a traditionalist, wants everything to be the same, is destructive toward new things, is highly judgmental and harshly criticizes others when they make mistakes. Or what if these two personas were flipped? Can parts of your character be the opposite of what you’d expect?

Another thing to consider: what is the style of the object? The style of an object can contribute significantly to it’s personality. For example, a vintage pocketwatch might have a very different personality than a pricey Rolex, or high-tech smartwatch.

Creating out a character profile is helpful in determining your character’s personality, as well as their background and physical appearance. Download our free Character Profile Template below to get started. Be sure to read our article, How to Develop a Character for Illustration. And if you are having trouble coming up with character ideas, try our Random Character Generator!

Finally, it’s important to imagine the universe that the object occupies.

What are the rules of its world? Generally, inanimate objects requite human interaction, so how much human involvement will there be in your character’s universe? Here are a few different approaches:

1. Objects live in our reality and can interact with humans, like in the books The Day the Crayons Quit by Drew Daywalt and Arnie the Doughnut by Laurie Keller.

2. The objects are alive, but humans are unaware, as in Pixar’s Toy Story franchise.

3. Objects live within their own universe, like in the books The Bad Seed by Jory John and Hug Me by Simona Ciraolo.

Time to design and draw the character!

Once you have determined how your character might move, a bit about its personality, and what kind of universe it inhabits, it’s time to start drawing. For my example below, I chose a paintbrush as the object I would turn into a character.

First, consider the style of your object. Start by observing a lot of reference photos. I did a web image search for “paintbrush” and sketched several different styles of paintbrushes. Most objects come in a wide variety of styles, and the first one that comes to mind might not be the most interesting choice! Before I got started, I thought I might use a narrow artist’s paintbrush, but I decided to use a wide brush, like the kind for painting walls and objects instead.

Identify elements of the object that you could repurpose for body parts. Do a simple sketch of the object and point out parts that could be other things. Look for lines you could make into a mouth, an area on the object where the face might go, an electrical cord that might be become a tail, or a curve that looks like a chin. Write down as many ideas as possible. Also, try rotating the object if it is something that doesn’t have a definite top or bottom. A paintbrush makes sense in multiple directions, so I did a second sketch with it flipped around. It depends on the object, though. A toaster wouldn’t work so well upside-down.

Start putting things together. Do some simple sketches of the object incorporating your ideas. Add arms, legs, and facial features, as needed. As you create these sketches, continue to think about how the object might move it’s body, pick up other objects, etc. 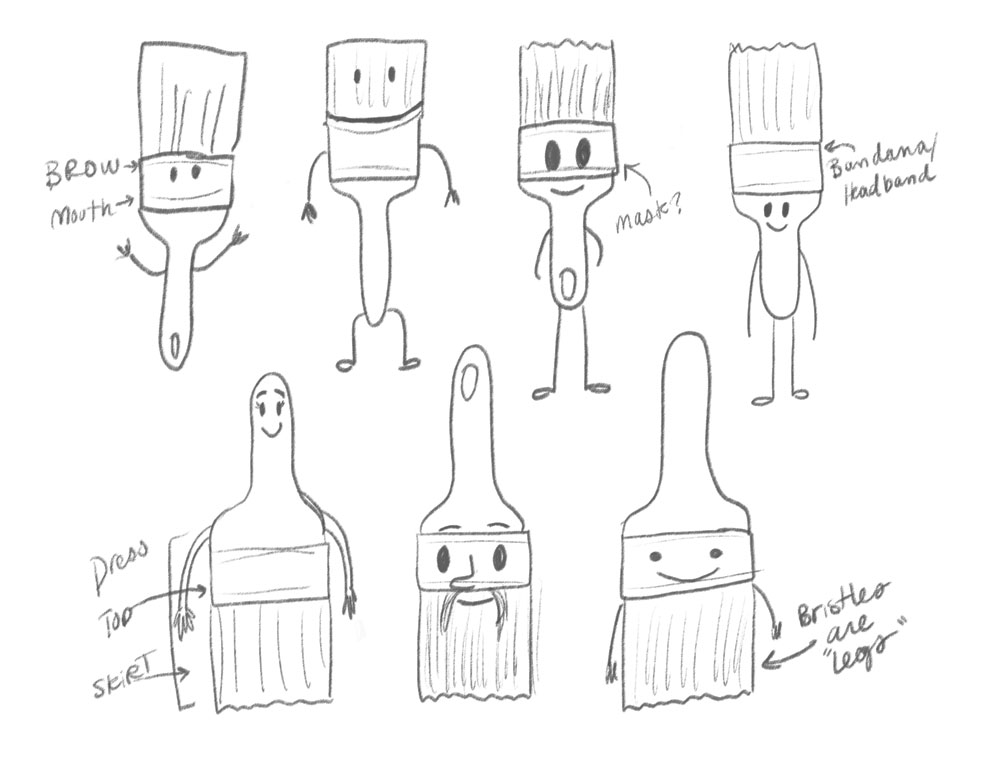 Chose one of your sketches to use for your final character. Make a refined sketch. Work out the details of what the face looks like. Determine the proportions of the object as well as it’s added body parts. Stay alert for discoveries too! While I was in this stage of working on my paintbrush character, I noticed that it’s arms could be made of bent up bristles! I also imagined how the character my manipulate it’s bristles to do other things, like splitting into two sections to become legs, or wiggling when it’s scared.

Finish your drawing with color, texture, and shading. At this stage, you should decide on a color palette — will the object be colored as it looks in real life? Or will you choose alternate or unexpected colors? To finish my paintbrush character, I used brushes from my Gouache Paintbox. First, I color-blocked in the shapes. Then I added detail to those flat areas of color. My Bristle Painter brush from Gouache Paintbox was perfect for drawing the bristles. The same brush also produces a nice wood-grain texture, perfect for the handle. 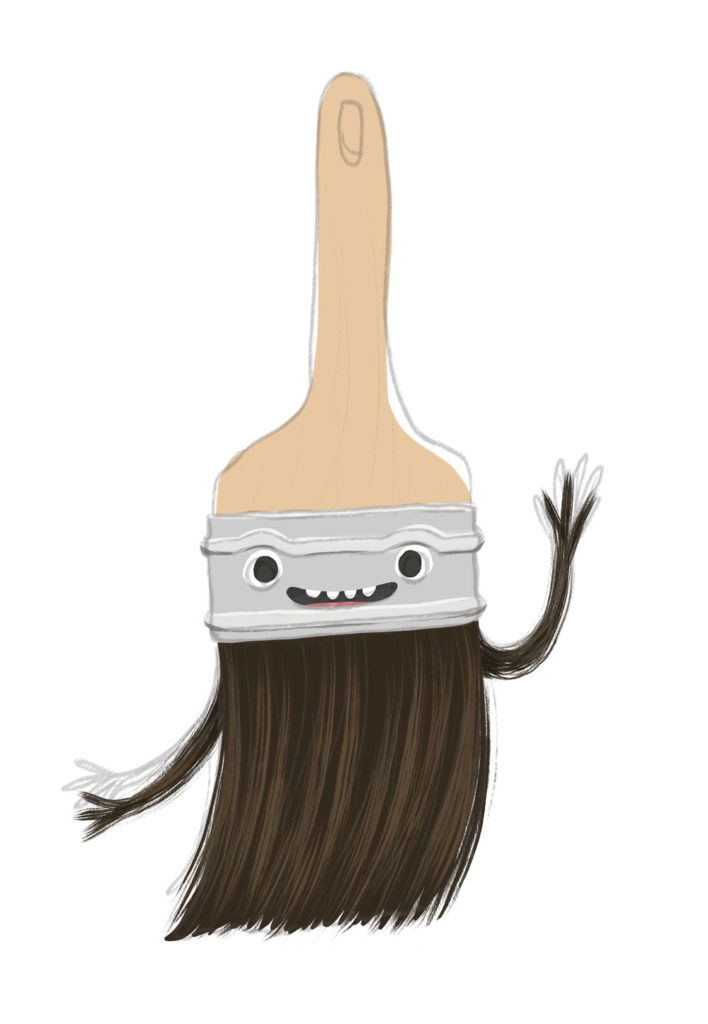 Don’t forget to accessorize! Decide if your object will wear clothes or accessories. Choose accessories that are pertinent to it’s world. For example, a fork character might wear a hat made of twirled up spaghetti! For the final rendering of my paintbrush character, I decided it would be fun to show it covered in paint, as if wearing a colorful outfit. 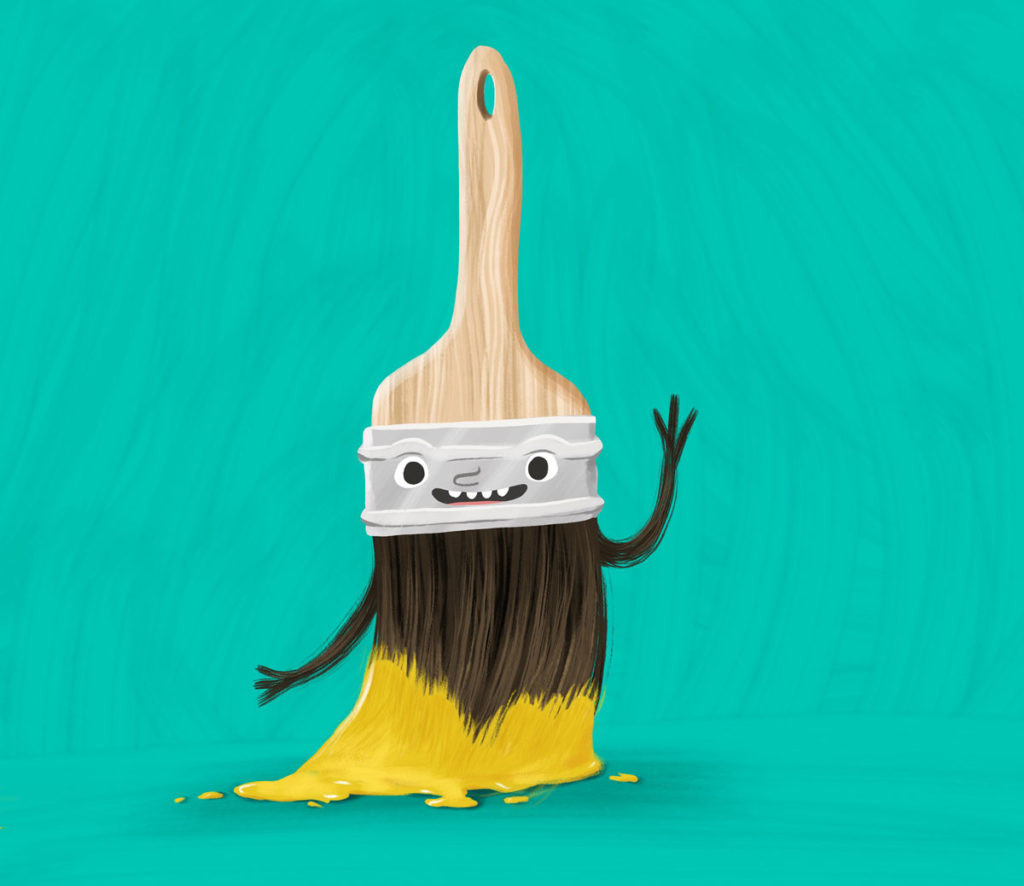 Time to go to…

Character Camp is a series of prompts, guides, and tutorials to help get you familiar with designing and drawing your own characters. This series was created in conjunction with the Making Art Everyday challenge. Each day for four weeks, we’ll have a different prompt to get you learning how to draw characters. We’ll be exploring human characters, animals and creatures, even inanimate objects as characters.

Look at this! Thank you for giving me something to look forward to,learning, inspiration, a feeling of connection and amazing treats for my eyes. Not something I’d care to BRUSH off!( Sorry) So many of us out here feel the same,I hope you know!
FUN!

Hello. Your tutorials are very helpful. Thank you. I bought some of your brush sets.

Do you usually work with your ipad flat on a table? (as opposed to being on an easel or a stand or something)?

By the way, especially with your brushes I like to change the procreate pressure curve by moving the left end up a little bit, so that I can make a mark touching the apple pencil very lightly to the ipad.

Can’t thank you enough for treating us to Character Camp! I look forward to reading your written tutorials. There’s so much there! And, they serve to prime my brain for the week’s theme and daily prompts. The Live sessions are the frosting! So enjoy watching and then re-watching so I can follow along. Gotta LOVE your brush sets!

A very inspiring and fun article. Thanks! 🙂

Thank to this, I can make a object show. 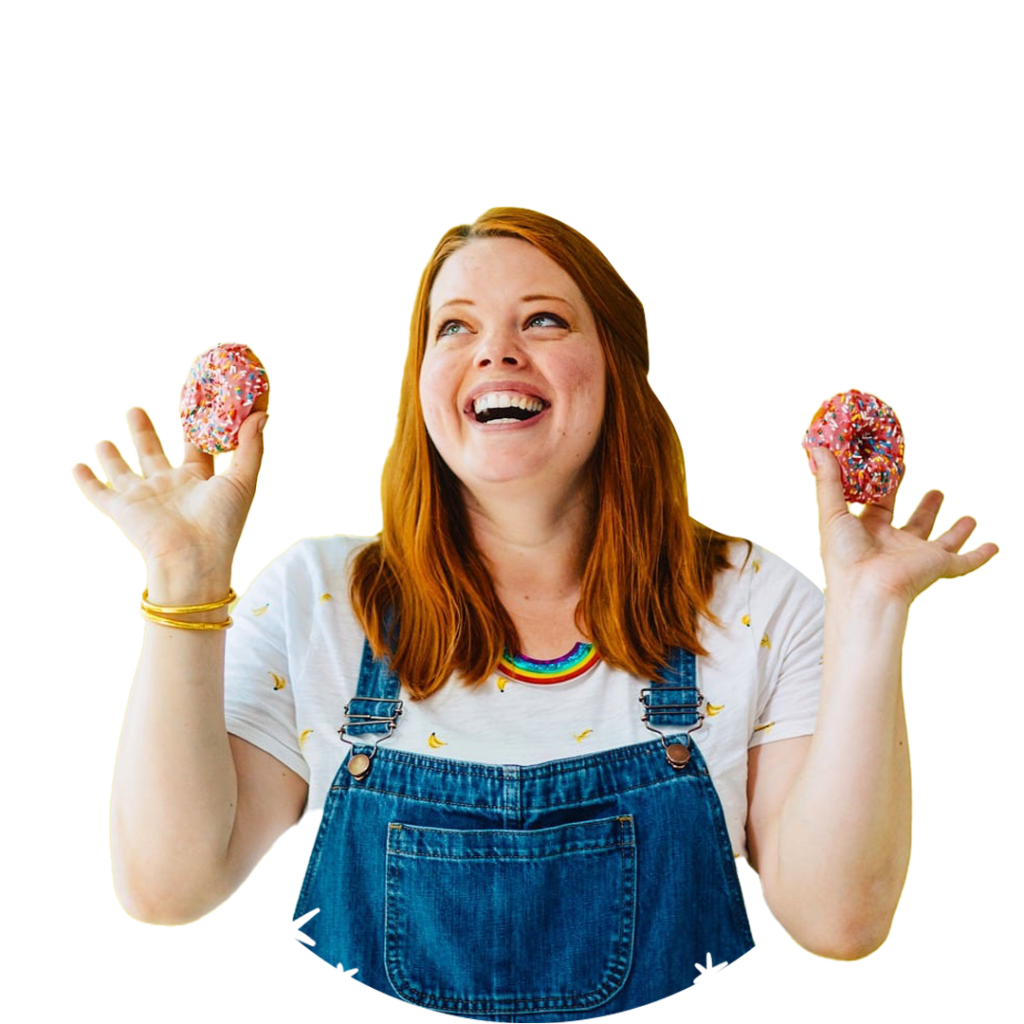